During the Sprint, every single tasks is transparent and you can bring product closer to it’s finish line. 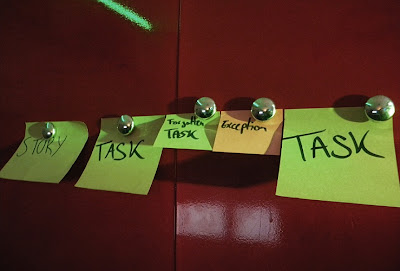 Sprint
A Scrum Sprint is a two weeks cycle, in which your Scrum team works on actual projects and products Task by Task. Although a typical Sprint is usually about two weeks long, it could also be shorter or even longer, up to four weeks - depending on how big the project, your team is working on, actually is.
While you are in a Sprint, you should only process Tasks that were scrumed previously in the Scrum meeting.

If there is important unexpected work to do, it has to be registered as an Exception on the Scrum Board.
Sometimes a team forgets to write down an important tasks during the Scrum Planning Meeting. Those Forgotten or Missed Tasks must be added to the Scrum Board afterwards, too.
For each Sprint you and your team need to choose the most important Story (project), according to your customer and Project owner, and work only on that at first. That’s how you are going to bring the product closer to it’s finish line with every new Sprint.

The Sprint Planning Meeting starts with a presentation of the tasks in the Backlog - Project Owner and Team present those “read-to-go” Scrum Stories. If your Scrum Stories have a prioritization, Stories with the highest prioritization have to be done first, of course.
Just after you have made a decision what to do next, the Project Owner describes what features he needs to be done first. The team has to write down tasks, which they believe have to be done in order to finish the job. The team discusses how much Scrum Points each Task has, and they have to set up a criteria (Test) which must be fulfilled to qualifiy a Story as done in the end of the Sprint.

Daily Scrum
Daily Scrum is an everyday meeting. It has to take place every day at the same time, and it should last not more than fifteen minutes.
Daily Scrum’s goal is to have an active meeting, where everyone is standing up and participates.  Sitting isn’t allowed, because it doesn’t provides an active team discussion. The meeting helps the team to coordinate its work and discuss any sort of problems.

It is the Scrum Master’s responsibility to hold the Daily Scrum meeting.
He asks every team member what he has done since the last Daily Scrum, what he will do next and asks if there  have been any problems holding him back from work.

Sprint review meetings
The Sprint Review Meeting follows on the end of every Sprint. The team reviews the last Sprint to the Project Owner from the perspective of the customer.
Team and Project Owner decide whether the previously defined Tests for every Story have been complied.
The Sprint Review Meeting is not a stiff PowerPoint presentation! The team demonstrates dynamicly its working progress and newly added features on the basis of the working software, product etc.
During the Sprint review Meeting and often part of an own Retrospective Meeting, the team discusses the last Sprint, to improve the next Sprint, discuss problems and to let new experiences be known for the next Sprint Planning meeting.
Right after the firsts Sprints the Scrum Master also can understand how much Scrum Points his team is able to manage during one Sprint, so it makes the next Sprint Planning easier and more precise.

The added Scrum Points show how fast the Team can work during Sprint - in Scrum the Team work load is called Velocity.
Velocity
Amount of work what a team is able to do during a Sprint is called Velocity.
By knowing their own Velocity, a Team can predict how much they can work during one Sprint. The Scrum Master calculates the Velocity by adding all the Scrum Points which the team members have earned until the end of a Sprint.

The Scrum Sprint helps you to discover factors, which keeps a team off the work (in Scrum, those problems are called Impediments).
Impediments
Impediments are called all the issues which keep the Team off their work and interfere completing a Sprint successfully.
Usually impediments are problems you often can’t resolve by your own, for example, a broken computer, low internet access and other interfering factors.
To make sure that everyone is aware of the Team’s Impediments, they have to be included on the Scrum board, so the whole Team can see how much Impediments interfere with their work.